In case you are from Rajasthan, you must have heard about Nagaur. This city is situated approximately in the middle of the state. Like other cities here, this too has its own great history.

This place is known for a lot of reasons. The biggest reason is production of world class spices. The popular MDH spices are exported internationally to most parts of the world.

While the animal fair is held annually over here. Which was famous in ancient times, as people use to plough their fields with Nagauri ox. Which is well known in India for its strength.

In the fair, a lot of cultural programmes and activities are held in the evening time. As the people coming in the fair come from different parts of India.

So for the entertainment of the people staying here overnight, the programmes are held on every evening.

Below are the places I visit every time I get an opportunity.

The olden name of Nagaur was Ahichatrapur. Which means “The place of hooded cobra”.

The fort of Nagaur was called Ahichatrapur Durg. Durg is the Hindi synonym of “fort” or “castle”. So that actually means “the fort of hooded cobra”.

This is one of the hotels in Rajasthan, which is converted into a beautiful heritage hotel. The hotel and fort is maintained and run by Mehrangarh museum trust.

Also read : 9 Unparalleled temples in Rajasthan one must visit

The fort was built by ancient Nagvanshi Kshatriyas in 2nd century. As you can see while visiting here, this fort is one of the rarest fort in Rajasthan, which isn’t built on a hill or cliff.

In fact this fort is situated exactly in the middle of the city. So while you are in the city, you can easily reach here.

In year 2002, this fort won the award of UNESCO Asia-Pacific heritage award for culture heritage conservation.

Nagaur fort has only one entrance, which is in Gandhi chowk market. While there is a long walk to the palace inside the fort. As the fort is built in a flat terrain. While the fort area is surrounded by huge walls from all the sides.

There are many gardens and fountains in the fort which make visiting this fort Worthwhile.

Nagaur was mostly occupied by Rathores/ Chauhans, and Nagaur fort was granted to Amar Singh Rathore by the Mughal emperor Shah Jahan.

The Ganesh temple inside the fort is quite popular here. And there are many people from the city, who visit this temple every week.

Bansiwala temple is the temple dedicated to Lord Krishna. This temple is situated in the middle of the city in a street called “Kathariyon ka chowk”.

On the ground floor, there is the temple of Lord Krishna. While in the underground floor, Lord Shiva temple is there.

There are plenty of programmes are organised inside the temple on various hindu occasions.

The place in the city, where this temple is situated, is very much famous for the temple. As well as the place is famous for manufacturing the best quality sweets in the area.

Tarkin dargah is situated in the city, not too far from the Nagaur fort. In fact the minarets inside the Dargah can be seen from the fort and even far away from there.

Tarkin dargah was commissioned by The Mughal emperor Akbar for Hamiduddin Nagauri. This Dargah is a major site for Sufi pilgrimage.

In the annual Urs fair, people from all the parts of country and even people from nearby countries like Bangladesh reach here to celebrate the festival.

Tarkin Dargah is considered a very peaceful place to visit. It is termed as a peaceful and mind relaxing place for the people visiting here.
So if you are in Nagaur, don’t skip this awesome religious place.

These cenotaphs are made in the memorial of Veer Amar Singh Rathore. Who was once the ruler of Ahichhatrapur(Nagaur).

Amar Singh Rathore was the son of the king of Marwar. The legend behind the Amarsingh is that he was disinherited by his family. So he reached to the Mughal emperor Shah jahan.

Once in Agra fort, Amar Singh killed Salasar khan in front of entire Mughal court. Which was not considered challenge for Mughal empire. So Mughal force tried to capture him.

But Amar Singh jumped from the Agra fort with his horse. And the Mughal force could not catch him. That’s why he is still sung as brave ruler of Marwar, who openly challenged the Mughal empire.

In the memory of Amar Singh, these cenotaphs were built. And now a days they are visited by tourists because of the beautiful Rajputana architecture they are built with.

Meerabai temple is situated in Merta town, which is around 82kms from Nagaur city. Which can be reached either from Ajmer or Jodhpur. This temple is also called as Charbhuja temple.

You must have heard about the great devotee of Lord Krishna names Meera. Who was later known as Meerabai, due to the selfless love towards Lord Krishna.

Actually Meerabai was born in Rajput rulers family. So She was a princess who turned into a saint. Meerabai was married to the prince Bhojraj of Chittor.

Adjacent to the temple, there is Meera mahal. Which was used to be the palace of Meerabai.

In Meera mahal, there is a museum, In which the devotion of Meerabai is depicted beautifully through paintings, arts and sculptures.

So this place really holds an important place in history of Rajasthan. Which must be visited for religious reasons.

Khimsar is around 45 km from Nagaur city, situated on the Nagaur-Jodhpur highway.

This fort was built in 16th century, and was used to be the fort for the Royal families. But now, as it has been converted into a heritage hotel, Royal family of Khimsar still lives in a part of this fort.

While the other portion has been converted into a beautiful heritage hotel. The hotel is really beautiful with a blend of ancient and modern architecture. 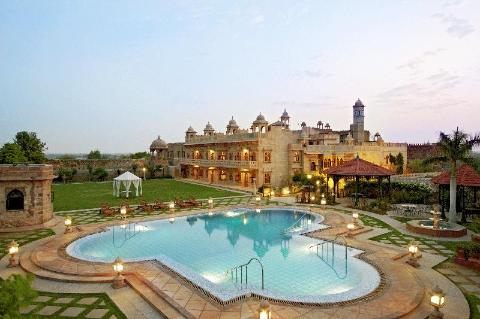 There is an annual cattle fair held in Nagaur. This fair is organised approximately in the month of Jan-feb.

Every year more than 50,000 cattle’s are traded in this fair. At times it used to be the biggest cattle fair in India. As In ancient times, the fields used to be ploughed with the help of cattle.

And the cattle, specially the Ox from Nagaur used to be known for its strength and stamina. So people from all over India used to visit Nagaur during this fair.

While it holds an important place for tourists, as they can enjoy the culture and beauty of Rajasthan. As the people travelling from far off used to stay here in camps overnight.

That’s why the merchants used to pass time and enjoy with music and songs during night time. Every year the merchants come with their best cattle to sell during the fair.

That’s why in the day time, when the trading is in progress. Sellers show off their cattle, and the buyers come and visit the suitable sellers as they are showing off their cattle.

As the sellers are living in their camps with their animal. Buyers come and visit the camps to buy the cattle. And in the evening time, the buyers leave the fair. Then the musical and cultural programmes and celebrations starts.

So, in order to experience true rural Rajasthan, visit this fair. That’s all I have to say.